All Sebocytes, derived from iPSC, are available in 3 human phototypes: Caucasian, Asian, African. 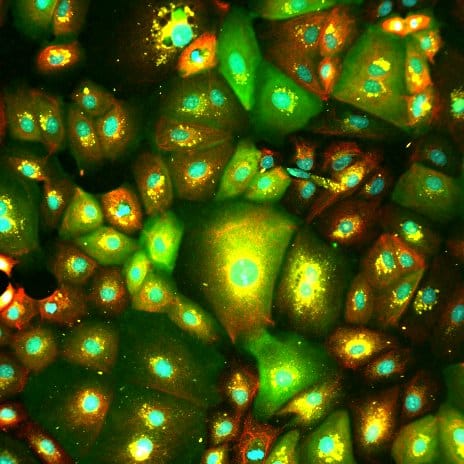 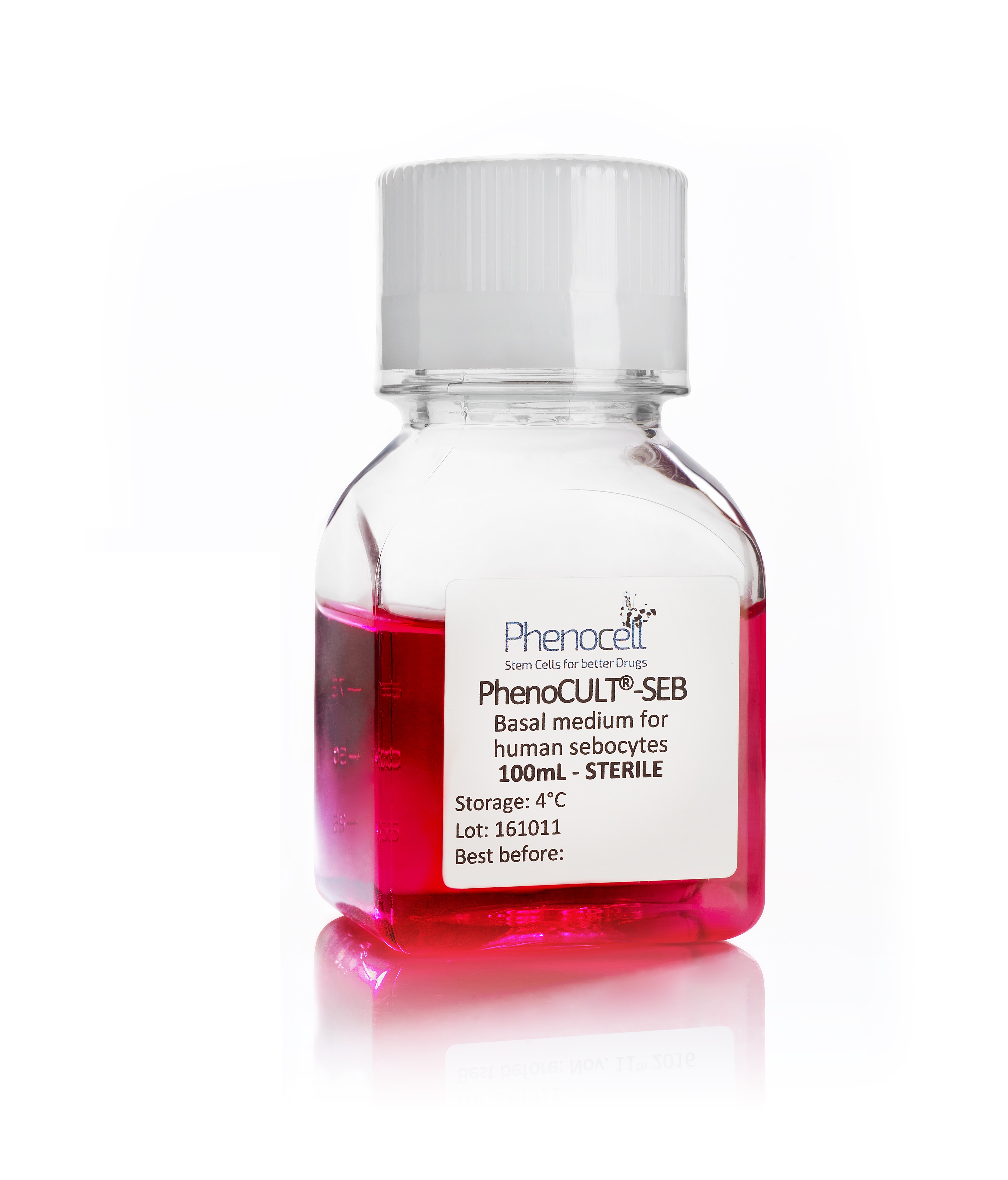 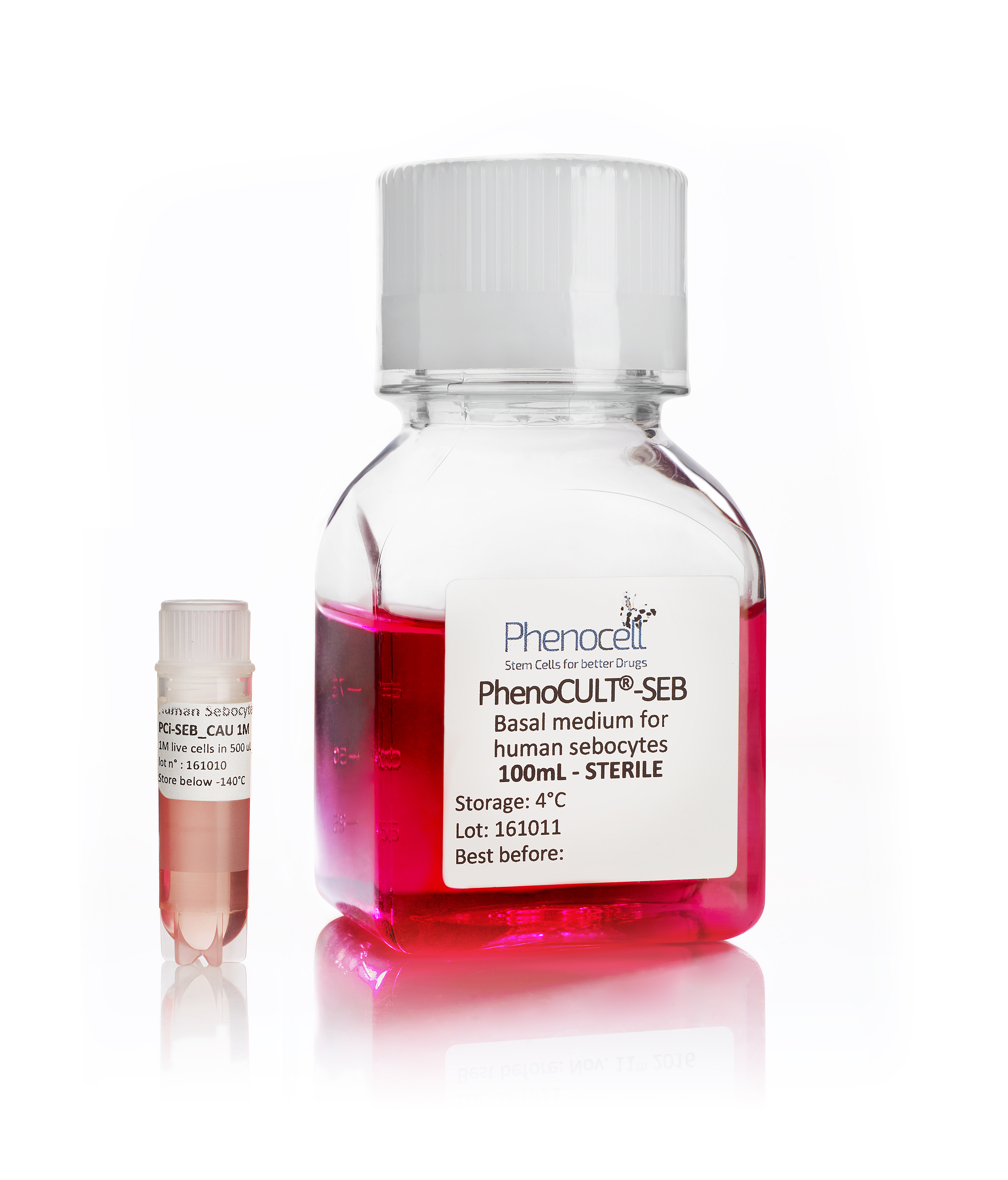 Sebocytes are epithelial cells specialized in sebum production. They are located in sebaceous gland, and nearly always in association with a hair follicle which iscalled a pilo sebaceous unit. These glands are found all over the body, with 400 to 900 glands/cm², except on the palms of the hands and soles of the feet. A young sebocyte is a tiny cell, the older they get the biggest they are, as they produce and accumulate lipids until they explode, and release the sebum. It is called a holocrine secretion. It means that sebum is released by the rupture of the sebocyte membrane. Sebaceous glands continuously release sebum, a mixture of lipids and cell debris, via a channel along the hair. A lot of different functions are attributed to sebum : antimicrobial, antioxidant, transport of pheromones, thermoregulation, hydration, and suppleness of the skin, but it is still a topic of intense research. The sebum composition is given in the table below :

The secretion of sebum can be extremely different from one person to another. On one hand not enough sebum can lead to a dry skin and to breakable hair, on the other hand too much sebum led to an oily skin and hair, a phenomenon called hyper-seborrhoea. An oily skin can lead to the most common skin disease : acne vulgaris.
‍
The process of the disease takes place in three steps :
- Excessive sebum production by sebaceous gland, often owing to hormone dysregulation.
- Colonization of the pilo sebaceous unit by Propionibaterium acnes, which feed itself with sebum.
- Release of inflammatory mediators, leading to inflammation and the formation of pimple.

Sebocytes behavior is under the regulation of a range of agents such as androgens, estrogens, retinoids, LXR, PPAR, IGF and growth hormone, as well as melanocortins. Obtaining primary sebocytes from a human donor is time-consuming and low-yield. Over the past decades, immortalized (cancer-like) cells line have been developed as in vitro models, such as SEB-1 and SZ95 lines. While they express some of the characteristics of primary sebocytes, they do not display the same range of functions and response to stimulating agents, as primary sebocytes. More faithful alternatives have been developed recently based on iPSC technology.